Jumping of an Airplane in Sydney

So if you’re a regular reader you probably have tuned in to see whether we actually jumped off the plane or chickened out last minute…!

Well Sydney was wonderful in March and we arrived to very excited….for totally different reasons! Aditya wanted to see ColdPlay and I wanted to jump off a plane– my fun in-joke of taking a leap of an airplane after taking a leap of faith! (p.s.- no worries…my marriage is just fine…despite my numerous attempts to kill one of us off!)

We arrived at Sydney Airport and it took us about 30 minutes to reach our hotel the Taj Blue in Woolloomoolloo Bay (yup quite a mouthful!)! We arrived at what looked like a great large building , more like an office than a hotel! It seemed large and boring! NEVER JUDGE A BOOK BY IT’S COVER! We entered the hotel and I was amazed. An old wharf had been converted into the most luxurious 5 star

experience and we were just blown away! Also we were told Russel Crowe lived just a bungalow or 2 away…! We were very excited but didn’t get to see him. His Dad tho’ was living in our hotel! A duplex suite awaited us and in a few minutes I was already on the phone with the concierge sorting out my plans for our trip!

Lunch was had at one of the restaurants just outside the hotel. at the edge of the

bay there are a series of fabulous restaurants each with master chefs at the held, it showcases Aussie dining at its best! After lunch we headed up to the Sydney Bridge where we had signed up for the twilight Sydney bridge climb!The Bridge climb takes over 2 hrs but most of it is spent in Instructions on how to climb and how to avoid falling! I have to tell you however…you can’t fall even if you tried, you’re hooked on so tight…The actual climbing is only an hour or even less! Is it worth it? Yes for the view and yes for the history….not for how long it takes!

Dinner was had at one of the numerous pubs and cafes at The Rocks! That’s what the area surrounding the bridge is called. It’s young, trendy, fun and lights up at night!

The next morning had easily MY FAVOURITE PART OF our trip! The Breakfast backstage tour of the Sydney Opera house! Nowgoing to Sydney you’ll definitely visit the Opera House ! The Opera House is in Circular Quay which is the bay you will take most of your ferries from. These ferries go to the Sydney Taronga Zoo where I personally recommend the Wild Australia Experience which lets you get up close to the animals. You can also take the ferry to Manly and of course Bondi Beach!

At the Opera House the MUST DO TOUR is the Breakfast Backstage Tour! It is INCREDIBLE!We went to green rooms, props rooms, set holding areas and even the Conductors room where I played the Conductor’s piano! We went on stage, to the lighting console, to each and every theatre and explored the Opera House with it’s magnificent history and stories. Regal,imposing and yet fiercely personal; as a theatre director I was in tears in awe of the sheer magnificence and beauty of the Opera House! MY PERSONAL FAVE TRIP!!!

The Cafe Opera is nice for an Irish coffee and a quick bite so definitely sit for a while and soak in the ambience! ALSO A MUST DO IS THE WONDERFUL CAFE SYDNEY– the rooftop of the Customs house at Circular Quay , it offers stunning views of the harbor and fabulous food!

Darling Harbor is the other harbor you must visit while in Sydney! Here you can visit the Sydney Aquarium, one of the largest aquariums in the world, catch a movie at the IMAX Theatre. When you are there grab a bit at Eat, Love ,Pizza or if you’re a Meat and Wine lover well then there’s nothing better than The Meat&Wine co. 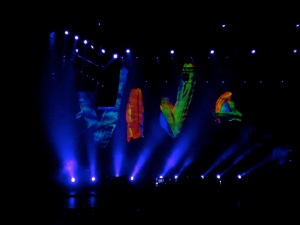 Post the Opera House we were off to the Concert! Coldplay was fabulous as usual but the Acer arena too far! It took us approx 2 hrs to get there by car, so we decided to take a train back! It’d be quicker we were told! But as the concert ended, the crowds were enormous and we had to wait quite a bit. Once at the station back in town, there were no cabs and we had to walk back almost to the hotel! An

evening which started out amazingly turned out to be quite a trek in the end! TIP! KEEP THE CAR if you’re going to a concert!

The following morning was the BIG SKYDIVE with Sydney Skydivers ! A drive took us 60- 90 minutes away from the center and to an amazing field. We were actually going to jump! As we arrived we were sent to gear up and well line up to get on a plane to jump! The plane was no more than a steel death trap and suddenly I was worried!Okay so we were jumping in tandem (with an instructor) but we were still jumping from 14400 feet!!!! What if this wasn’t a leap of faith but a leap testing my faith in God and a test on whether the ground really was as hard as it looked! I looked nervously at Aditya who offered to jump first…! No! This was my stupid idea and I was going to see it through! The plane moved its way up rattling along the way and one of the instructors pointed way down below…”That’s the Blue Mountains,” she said, joyfully! Why were they below us??? Aren’t mountains supposed to be tall? What the heck were we doing!!!?? And before I knew it, the back of the plane opened and we had to jump! The man in front of me almost had his nails ripped off the way he clung to the top of the plane for dear life! I wasn’t going to do that. This was my idiotic idea and I was stubborn enough to see it through! I JUMPED.There were no butterflies or sinking stomachs. A calm enveloped me as I flew downwards almost like a fairy looking at the earth from above! I’ve done this before I felt and suddenly there was a serenity and calm that I cannot even begin to explain. I felt free. I felt at peace and I felt unbelievable! And then almost too quickly( 8 mins or so later) a parachute pulled me back and suddenly I

was heading towards people rushing to meet me and a landing zone! I couldn’t believe I’d done it. I couldn’t believe it was over. I couldn’t believe the incredible adrenalin rush! I do remember calling everyone back home saying I’d jumped off a plane. At 5 am India time, I think the FAMILY WAS WONDERING why I was still calling them if I’d indeed jumped off?! Only my Grandmom asked me a very pertinent question” Why did you do such a thing?”! I

cannot explain it… but it made perfect sense!

On the anniversary , my very understanding husband asked that in case we did survive to try and do one romantic thing on the Anniversary. No, he said a leap to our ‘possible death’ (his words not mine) was not even vaguely romantic even if it did have a ’till death do us part’ ring to it. So on the anniversary we headed up to Rose Bay to take a Sea Plane over Sydney and get dropped off at a restaurant where a delicious 5 course meal was waiting for us! Perfect and romantic, the water was clear and we had the most stunning views of the harbor and were dropped off at a wonderful restaurant where we had pre-ordered our favourites!

Luxurious dining at its best! The perfect romantic anniversary.

A bit of music, a heck of a thrill and a great view– my idea of the perfect trip and the perfect marriage….so Sydney turned out just PERFECT! 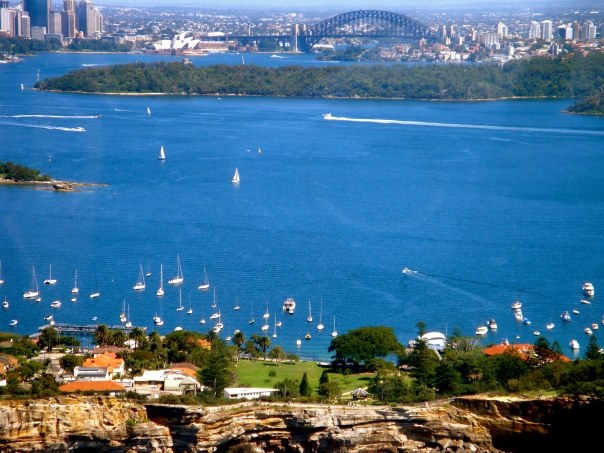 Best times to travel-: Aussie land…so I recommend October– March however whittles season starts in May- November where you can see the gigantic beasts swim gracefully in the Sydney Harbour.