Times Square in Hong Kong, Felix and Macau- an odd collection of experiences!

Off we went to Times Square (NOTHING LIKE THE ORIGINAL!) for what we though would be a bit of shopping! It’s a mall complex with a couple of shops and we wandered for a few hours settling finally for a warm cup of Starbucks! In New York the loud music and the glaring lights(yes even in the day) of Times Square can sometimes get too much for anybody but I missed it a bit in this stark structure which bore no resemblance to the original!

But we had a whole evening of exploring left and a musical to catch! So we were off to the wonderful ‘Chicago’ a musical so beautifully translated on screen , i couldn’t wait to catch it live! Incredibly plush theatres, fabulous drinks and high end food unfortunately couldn’t save this play tho’. It failed in comparison to the beautifully sculpted, magnificent looking film…but then again that also had Richard Gere!:)

But…when traveling, there’s always more excitement in store and so it was off to the grand Peninsula Hotel for an early dinner! Arriving in to Kowloon, we went straight to the Peninsula. On a bustling street with tons of street shops, Kowloon’s grand hotel stands magnificently proud and gloriously tall! The Lobby was a bit too crowded for my liking…almost like an airport terminal… guess everyone wanted to get a quick look at the Peninsula.. so rather than sitting down and looking ’round the lobby we went straight up to the European fine dining restaurant Felix! This was fabulous- luxurious, with a breathtaking view of the harbour, attentive staff, quiet and just perfect!

Macau was a trip that people had talked to us about so one evening we decided to hop on a ferry with our passports and do 2 countries in one night!It was the birthday eve and this made sense to us travelholics so of we went to the ferry terminal to board a jet to take us to Macau. Now this is crowded , muggy and pretty awful so try and have tickets in advance so you can just get on. The Visa services and passport people are rude and had it not been a birthday eve plan, I would have happily turned back with no regrets! The ferry takes an hour but is very crowded- both with tourists and with avid gamblers…so you really have to jostle for space- NOT FUN! 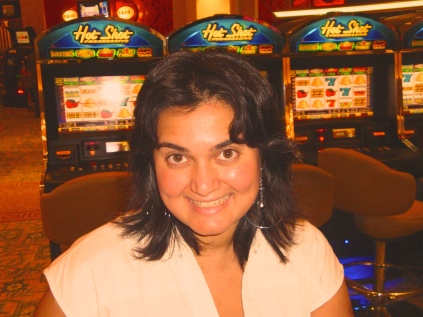 I am told that Macau has wonderful sights and history during the day and that I should go back and spend a few days there! It is very unlikely since my first experience(at the  was pretty awful! We arrived to Macau post dinner and it looked like a version of Las Vegas only not as glitzy or as glamorous. It looked shiny, loud and a little bit too done up! The gambling was fun though and every hotel tried to keep it’s patrons happy with all the games, lots of glitz and glamour and lots of gold! We spent maximum time in the Venetian in Macau which I felt was prettier than the other rather ‘loud’ hotels on their ‘strip!’ We played a few games – I won a bit and then it was back to the hotel for a quick birthday cake to end the night!

Hong Kong was lovely with some fun times and great restaurants and a bad play and I’d love to see Macau again( maybe during the day!)…and travel there via helicopter next time to avoid the awful ferry!

That’s why I must travel again and …soon!