A date with History- Pompeii and Vesuvius

Pompeii and Vesuvius are MUST -DO Trips from Naples. They’re not very far – Vesuvius is about 9 km from Naples and Pompeii 8 odd kms from it. The tour we booked was a small group tour on Viator and we found that Viator for the most part, gave us great deals and interesting tours! The tour started post a fabulous, filling breakfast at our beautiful hotel and soon we were on our way. We had barely 8 people on the tour and it was a small, quick bus ride to Pompeii.

I have never been particularly interested in history but had wanted to go to Pompeii and am so glad I did. The few hours that we spent in Pompeii took me to another time. The ruins are so well preserved and the city so incredibly planned , it takes almost no imagination to transport yourself to a forgotten time and to the 7th- 6th Century BC where this city flourished and thrived! Well laid out roads , perfect shop fronts with little houses on top, schools, gladiator training areas and theatres; the planning then was infinitely better than in some of our modern cities even now! Our guide was

knowledgeable and interesting and I could imagine the life of a Roman man as he came to work in the city of Pompeii. I stared in awe at the amphitheater and marveled at the Roman spa. I saw holes in the footpath where horses could be tied to ‘park’ them. The vision and foresight was incredible ! I was amazed that a pizza oven even back then looks so similar to a pizza oven now. I also loved how the roads were tilted so that

water and dirt could be swept downwards. Should you need to pass there were three rocks at regular intervals for you to walk across. Shopkeepers had a store front facing the road and most lived just above their store. Traders and visitors would come early in the day for trade into Pompeii and after trading through the day , eat lunch in the city. Then it was time for the spa and based on your status in society you’d move to the spa meant for you. Steam rooms and sauna rooms were still preserved and because the day we traveled was a particularly sunny day- I suddenly wished to have a quick plunge myself! They also had mosaic tiles which were still there.Bright and colorful- you could see that Romans really lived life King size!

Then there were also the brothels where in case you didn’t understand the language images were painted on the walls and you could choose what you’d like to do with the prostitute of your choice! An

incredibly interesting time and an even more eye-opening experience for me! 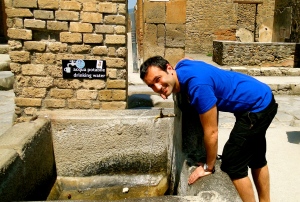 What was also really fun were the drinking water taps all carved with Gods and Goddesses with the taps becoming the mouths- they also served as road names and helped in directions for the city. it was also interesting to see the water wells had a small indent for the left hand allowing you to drink with your right.It’salso interesting to note that the water can still be drunk and is drinkable even today!

Molds of people who died during the eruption can also be seeing which gives you an idea of how truly horrible that explosion was! 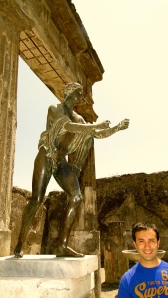 We saw temples and Piazzas(squares),remnants of a time once forgotten but so ahead of it’s time in planning and in structure, you couldn’t help but imagine what if? What if Vesuvius hadn’t erupted? What if the city hadn’t been lost? A tragic loss.I was privileged to have been able to gain just a little bit of insight into history. This is an absolute MUST DO on any trip to Naples! 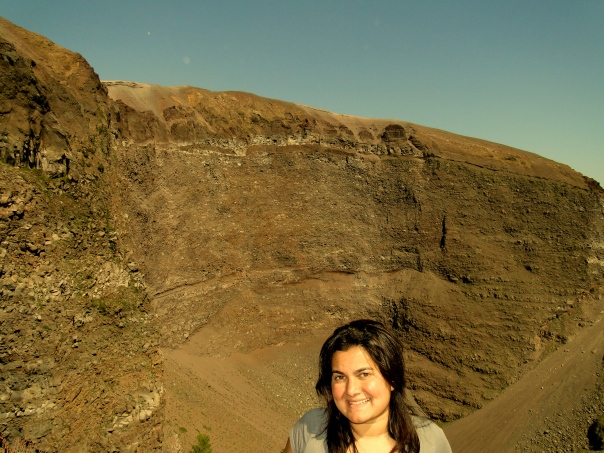 And then after a quick pizza it was off to Mount Vesuvius. Here the tour got a little less interactive. You were now advised to trek on your own and meet back in an hour. Vesuvius is an active volcano and is the only volcano on the European mainland to have erupted within the last hundred

years. The climb is steep and the black volcanic mud makes climbing tricky. They offer sticks to help climb- take them! Even if you think you can do without them – they help you keep your footing firm. I didn’t take them- I regretted it! The climb is long with very few (almost none) stops to catch a breath. It gets hot. So wear comfortable clothes and very comfortable shoes. The walk down is also tricky because the black sand slips and moves quite a bit. You can also see a black river of ash from Vesuvius which gives you an idea of how the ash and steam moved down from the volcano! Truly terrifying!

An active volcano, a lost city, a dramatic past- history came to life for me that day!

Price Factor-: About $120 for the day trip! Absolutely worth it!